There is something about both of us that goes deeper than blood or black and white. It is our common search for a better life, a better world. I march now over the same ground you once marched. I fight for the same things you fight for. My children’s needs are the same as your children’s. I too am America. America is me. It gave me the only life I know – so I must share in its survival. Look at me. Listen to me. Try to understand my struggle against your racism. There is yet a chance for us to live in peace beneath these restless skies.

Weinstein Hammons Gallery is pleased to present I Am You, an exhibition of 12 photographs by Gordon Parks. The gallery has been working with the Gordon Parks Foundation since 2012 and this will be the third exhibition of his photographs. I Am You will be on view by appointment starting Friday, July 10th.

A preeminent photographer, poet, novelist, composer and filmmaker, Gordon Parks (1912-2006) was without a doubt one of the greatest American artists of the 20th century. Using his camera as a “weapon against poverty and racism,” Parks has left a remarkable body of work documenting American life for more than five decades.

The I Am You portfolio was created in 2017 to bring together important Parks works relevant to the American Civil Rights Movement and social and racial injustice. Featuring an essay by Jelani Cobb, staff writer at the New Yorker magazine, photographs in the series include portraits of Rosa Parks, Jackie Robinson and his son, Mahalia Jackson singing at the 1963 March on Washington, and Malcolm X giving a speech in Harlem. Also included is an image of the crowd of 250,000 people gathered in front of the Lincoln Memorial listening to Reverend Dr. Martin Luther King, Jr. deliver his historic “I Have a Dream” speech. While most of the photographs were taken almost 60 years ago, they are as relevant as ever.

Parks' photography has been the subject of national and international exhibitions at numerous museums, including the Corcoran Gallery of Art, The Studio Museum in Harlem, Fondazione Forma per le Fotographia, High Museum of Art in Atlanta, New Orleans Museum of Art, Museum of Fine Arts Boston, Art institute of Chicago, and the Getty Museum. In 2019, the Museum of Modern Art acquired 55 new limited edition prints of Parks' work on the subject of crime. 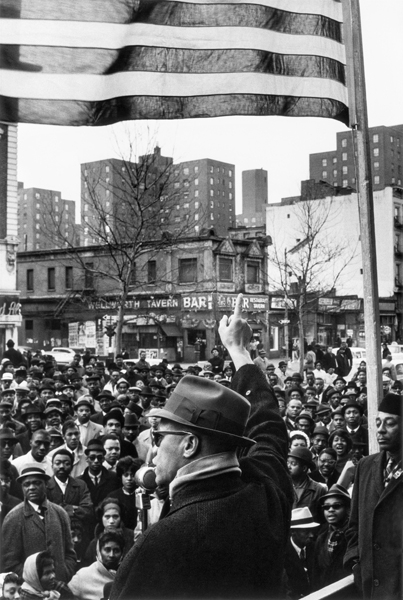