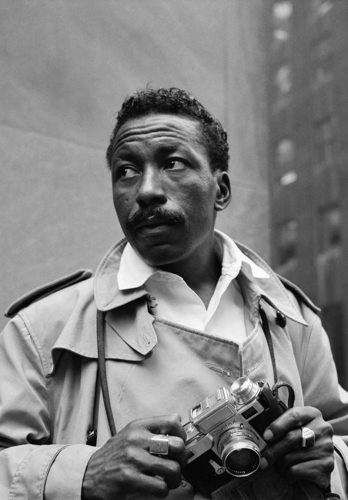 Gordon Parks (1912-2006), one of the greatest photographers of the twentieth century, was a humanitarian with a deep commitment to social justice. He left behind an exceptional body of work that documents American life and culture from the early 1940s into the 2000s, with a focus on race relations, poverty, civil rights, and urban life. Parks was also a distinguished composer, author, and the first African American filmmaker to helm a studio film. His celebrated artistic work includes photographs taken for the Farm Security Administration (FSA), the Office of War Information (OWI), Life, Glamour, and Ebony, as well as his literary work, including the novel The Learning Tree, which he adapted, directed, and scored as a film, and his direction of the feature film Shaft (1971). Parks’ work is held in the permanent collections of major museums across the United States.

Philip B. Kunhardt, Jr. (1928 - 2006), a former managing editor of Life, authored numerous books, including the Christopher Award-winning memoir My Father’s House and A New Birth of Freedom: Lincoln at Gettysburg, winner of the Barondess/Lincoln Award. He is also the coauthor, with his mother, of Twenty Days, the definitive account of Lincoln’s assassination and its aftermath, and coauthor, with his sons, of The American President; Lincoln: An Illustrated Biography; and P.T. Barnum: America’s Greatest Showman. Kunhardt and Parks worked together for decades and remained lifelong friends. Kunhardt established the Meserve-Kunhardt Foundation in 2002 to preserve his family’s collection of 19th and 20th century photography. In 2006, Kunhardt and Parks co-founded The Gordon Parks Foundation.